What is ‘sentience’? When a person or animal is injured they react by experiencing pain, marshalling the body’s defense systems to repair the damage and begin the process of recovery. The question, surely, is whether we know enough about sentience to be quite certain that plant life does not have it.

Every ecologist out there, and even amateur gardeners, have been known to swear that plants, too, ‘feel’ things, but it is only recent research that has demonstrated just how ‘intelligent’ they really are. Plant life has a heritage far older than mankind, and in some respects, it makes we humans seem inadequate! Is it not about time to take more notice?

Feb 12, 2010
Lutie Larson, after reading The Secret Art, had an interesting comment on the difference in the way she views subtle fields and radionics.

Below is an excerpt of material from Lutie's books Little Farm Tips and Techniques for Farmers and My Understanding of Radionics to further illustrate her point.

David Bohm, renown physicist of the 1950s, taught extensively of an implicate order of things. He said, “The field of the finite is all we can see, hear, touch, remember, and describe. This field is basically that which is manifest, or tangible. The essential quality of the infinite, by contrast, is its subtlety, its intangibility. This quality is conveyed in the word spirit, whose root meaning is wind, or breath. This suggests an invisible but pervasive energy, to which the manifest physical world of the finite responds. This energy, or spirit, infuses all living beings, and without it any organism must fall apart into its constituent elements."

In radionic research we actively seek out this infinite energy field. We link with it, listen to it, observe its action. We attempt to capture it in language with rates or settings on our instruments. Our communication skills on these levels are still very sketchy and often we don't know exactly what it was we did that set things into motion. Fortunately the path one takes in radionics is well marked. It is a logical path. The principles are there for anyone to discover. The results, amazing as they may seem, are well grounded on solid principles. It is a field of research that stretches and strengthens our trust in the infinite world of subtle fields. It was this very realization that led George de la Warr to exclaim, "Seeing is not believing; believing is seeing!"

Our pattern of health lies deep within our subtle fields and is part of our inherited pattern of perfection. Most religions teach us to strive for perfection and refinement. They teach that God lies within. I believe that this is true and as we become more aware and more resonant with these patterns we also become more refined spiritually. Fortunately we also become refined physically. Our health is improved and we can create resonant surroundings. This is one of the ways radionics is affecting our world today.

In a basic course I spend quite a bit of time defining the subtle energy we call subtle bodies or layers. I use a simplified model that students can relate to and I include the physical body as a subtle body. It is the last, the newest, and the most dense of all our subtle bodies. It is also the one with which we are most familiar. The reason for this is that our culture, and lifestyle, emphasizes physical activity and we have little time for anything else. Other cultures have emphasized spiritual things and have much more of an awareness of the other subtle bodies.

In order to work in the subtle energy fields, a student needs a clear understanding of the subtle bodies. The idea of subtle bodies may seem metaphysical in nature rather than scientific because our cultural consciousness does not include an awareness of anything more than the physical. It seems that with new discoveries in nuclear physics our consciousness is changing. Scientists are becoming aware of subtle energy fields and the auric fields are being detected with "scientific instruments" and procedures. Back in the 60's Kirlian photography was first thought to demonstrate these fields.

I think a good definition for subtle body fields is "--a set of primary vibrational fields associated with (and necessary for the maintenance of ) a physical form." Each subtle field increases in density from the finest, which seems to be the spiritual essence, to the most dense, which is indeed the physical form.

Whether all physical forms have the same number (or type) of subtle bodies is a subject of discussion among researchers. These vibrational fields appear to be unique to the kingdom (and possible phylum) of each organized form. Even a man-made tool or machine seems to have a set of subtle bodies. The finest aspect being the "idea" and the most dense aspect being the tangible physical form.

Alyce Santoro on The Secret Art

Friend Alyce Santoro has written up an excellent review of The Secret Art. The review originally appeared on Facebook and Amazon on January 9th.

A “radionic apparatus” is a system, mechanical or otherwise, developed for the purpose of receiving and transmitting subtle forms of energy through an earnest practitioner into a subject. Since the early 1900’s, some developers of such technologies have been using the word radionic to describe devices used mainly for purposes of healing.

Mr. Laurie’s book provides a through and fascinating account of the history of this little known and much-maligned field. He suggests that outside of the medical and scientific communities, not only are radionic phenomena heartily accepted, they have been functioning effectively for thousands of years at the hands of shamans, artists, and musicians.

Mr. Laurie’s thesis is that radionics, while by no means a lost art, may be a slightly-misplaced one - the ideas behind it have been discounted by those unable to appreciate the power of forces that cannot be quantified. When presented as science or medicine, radionics is easily challenged. Introduce it as a powerful creative tool, however, and radionics becomes “The Secret Art”.

We take for granted that all human beings are inherently capable of experiencing intangible, unquantifiable sensations such as intention, intuition, inspiration, and other emotional states. Technologies for accessing and working with these invisible forces have been cultivated by shamans, artists, and holy people since the dawn of time. That a work of art or a piece of music can be found “moving” or “transformative” comes as no surprise. Why, then, is it such shock (to the western mind, at least) when a force we find “mysterious” serves as the catalyst for physical transformation? Because our in our culture we have come to look to the scientific method as an all-purpose evaluation tool – if something doesn’t measure up scientifically, we tend to discount it as useless or non-existent.

But as we hurl ever forward into an age of new quantum-techno-science, old paradigms begin to break down. We encounter tangible evidence of the power of the invisible every day as information that arrives via internet and wireless technology routinely shapes our lives. Research into quantum physics alludes to the existence of strange micro-realms that work behind and within the scenes to compose our macro reality.

Ironically, discovery of the structure of DNA, holographic imaging, and other modern scientific breakthroughs are only serving to help lend insight into why many established “intuitive” technologies, such as prayer, shamanic and Tibetan Buddhist ritual, and radionics, actually work.

“The Secret Art” is an invitation to consider that the power of intangible forces and our relationships with them may hold keys to the ways we shape ourselves and our world. Mr. Laurie suggests that it could be artists, unfettered by limiting beliefs and already consciously attuned to subtle energy, who may be best equipped to combine traditional systems with contemporary research to generate powerful new technologies. The book is a radionic device in itself, a call-to-action for those willing to work with phenomena that we are aware of through our senses, but that are yet to be classified by science.

Rafael Attias brought students from two of his classes ( 7001 - Interactive Text and 7028 - Soundmarks ) at RISD down to visit the studio. Gordon and I will help mentor the students in their class projects. 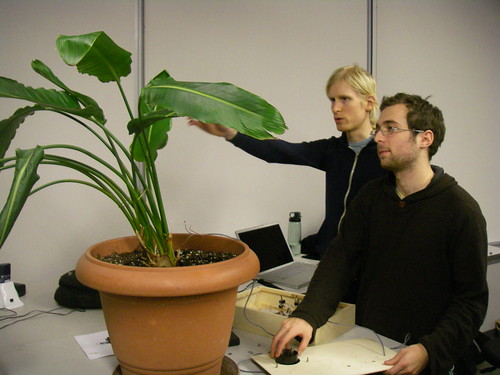 EMLI is a student project from Daniel Campbell and Daniel Roberts, made while they were enrolled in Vincent Leclerc's Physical Computing class at Concordia University in 2007.

The two Daniels built a hardware interface to receive millivolt signals from plants and sonify them in MAX/MSP on an Apple MacBook Pro. Their results and especially the reactions of the plants were eerily similar to our own findings. Most interesting is the end of their video, seen here, where the plant reacts to the intent to close their program, but stops when they point this out.

Their project was inspired by many of the same researchers that we have looked to: Cleve Backster, George L. Lawrence, and Michael Theroux.